At the Asian Civilisations Museum (ACM), Asia is viewed through the lens of Singapore. The museum is dedicated to cultivating an understanding of Singapore’s maritime and multicultural heritage by situating it within the broader context of the archaeological, historical, and art historical developments of Asia and the world. The ACM opened at the former Tao Nan School Building on Armenian Street on 21 April 1997. In 2003, the museum and its collections moved to its present location, the colonial-era Empress Place Building (built 1864–67), beside the Singapore River. The Armenian Street building was later redeveloped to house the Peranakan Museum (TPM – a component of ACM), which opened to the public in 2008. There are more than 77,000 objects in both collections combined.

ACM has thirteen permanent galleries, which cover an area of 3,923 square metres. The galleries are organised thematically to emphasise the importance of networks and flows of people, ideas, and artistic traditions across boundaries. The first floor galleries tell the story of Trade and the Maritime Silk Route through the museum’s strong collection of Asian export art dating from the 9th through to the 20th century. These include the Tang Shipwreck Gallery, the Singapore Archaeology Gallery, the Maritime Trade Gallery, and the Court and Company Gallery. There is also a Contemporary Gallery, where artists are invited to create works that play off, and help contextualise, the historical displays. The second floor galleries focus on how systems of faith and belief spread across Asia, and their impact on the way traditional imagery was localised and adapted in new regions. The galleries are subdivided into Ancient Religions, Christian Art Gallery, Islamic Art Gallery, Ancestors and Rituals, and Scholars Gallery (displaying art inspired by Confucian and Daoist concepts). The third floor galleries present objects and displays on the theme of Materials and Design. Adopting a pan-Asian approach, and broad historical reach, the galleries here include the Fashion and Textiles Gallery, Jewellery Gallery, and Chinese Ceramics Gallery.

One of the highlights of ACM’s collection is the Tang Shipwreck cargo, which is emblematic of the Maritime Silk Route that connected China, Southeast Asia, and the Abbasid Caliphate (modern-day Iran and Iraq) at least as early as the 9th century. The ship, most likely of Middle-Eastern origin, sailed to China via India and Southeast Asia. On the way back, the Chinese cargo comprised over 70,000 ceramics as well as objects in gold, silver, and bronze. Some objects have decoration that show they were tailored specifically for the Middle Eastern market. The story of the shipwreck demonstrates the complexity of early trade and cross-cultural interactions, showing that globalisation and interconnectivity are ancient phenomena.

As a continuation of the narrative of global trade in subsequent centuries, the Maritime Trade and the Court and Company galleries display art made during the 14th through to the early 20th century in various parts of Asia for export to foreign consumers. Objects include Chinese blue-and-white porcelain with Arabic inscriptions and floral designs intended for an Islamic audience, and artworks made in Batavia and Manila that document Dutch and Spanish trade activities in those cities. Exquisite mother-of-pearl, tortoiseshell, and ivory objects from India and Sri Lanka are a highlight of the Court and Company gallery. The objects integrate elements indicative of contact with foreign cultures, and demonstrate the profound impact of exchanges occurring in multiple directions as a result of trade, migration, pilgrimage, colonial aggression, and diplomacy.

The Peranakan Museum houses one of the world’s finest and most extensive collections of Peranakan objects from Southeast Asia. A Malay-language term with multiple meanings, “Peranakan” now commonly refers to communities who are descended from foreign traders and migrants (predominantly Chinese, Indians, and Arabs) who married local women in the Malay world. Some Peranakans established important relationships with the colonial administration through their involvement in commerce, politics, and social affairs. Peranakan art is a result of this intermingling, combining artistic traditions of the cultures of both the migrants and their local spouses. The museum's galleries showcase the eclectic and hybrid nature of Peranakan cultural traditions and visual arts, and offer a glimpse of how modern-day Peranakans have evolved with their culture. The Peranakan Museum is currently closed for renovation, and scheduled to re-open in mid-2021. 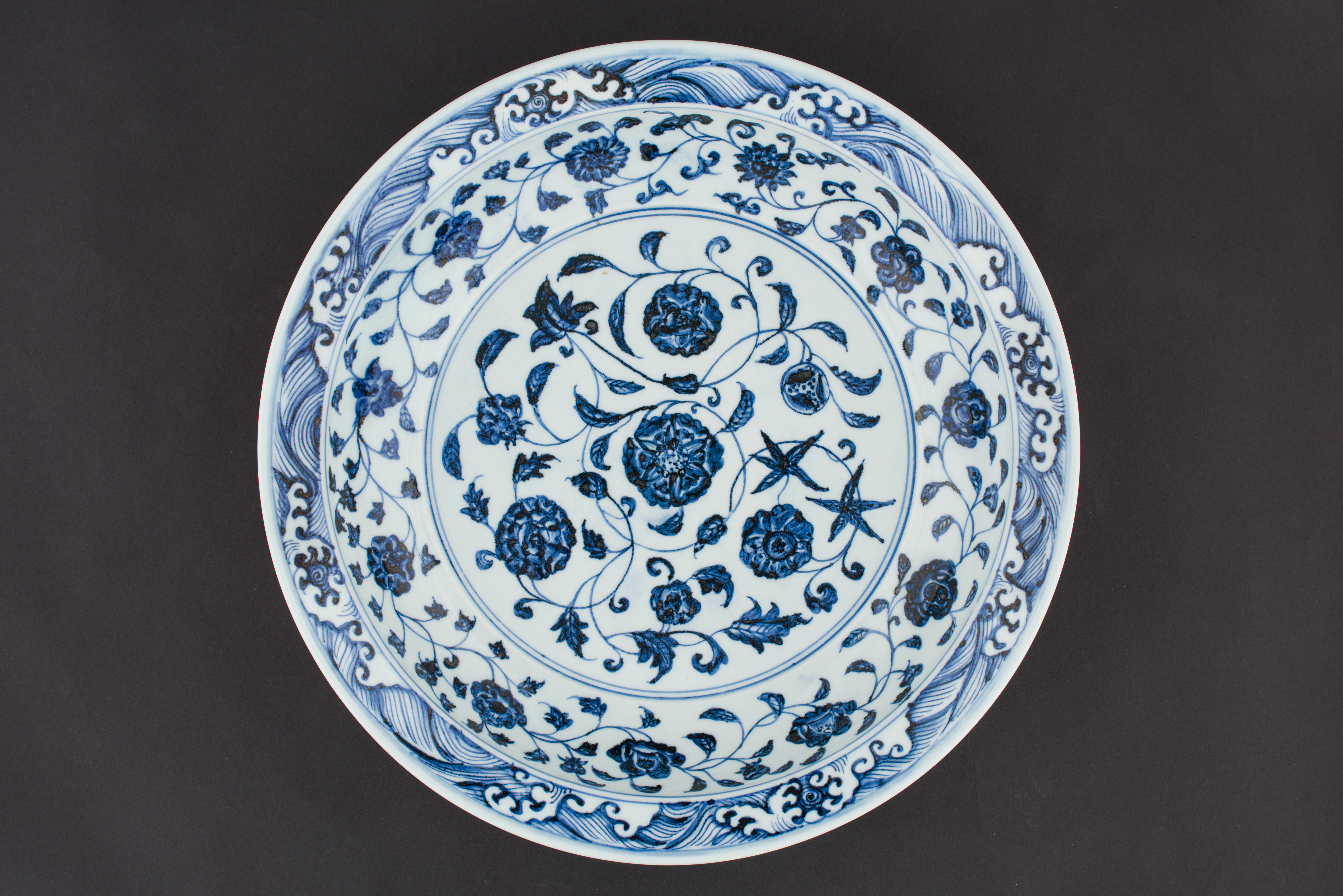 This large blue-and-white dish is decorated with floral scrolls at the centre and a frieze of eleven different flowers scrolling around the well. The rim has a band of swirling crested waves. It was painted with strong underglaze-blue pigments rich in iron oxide. Such large dishes were made for the domestic market but also exported to the Middle East, where it became a part of courtly collections. 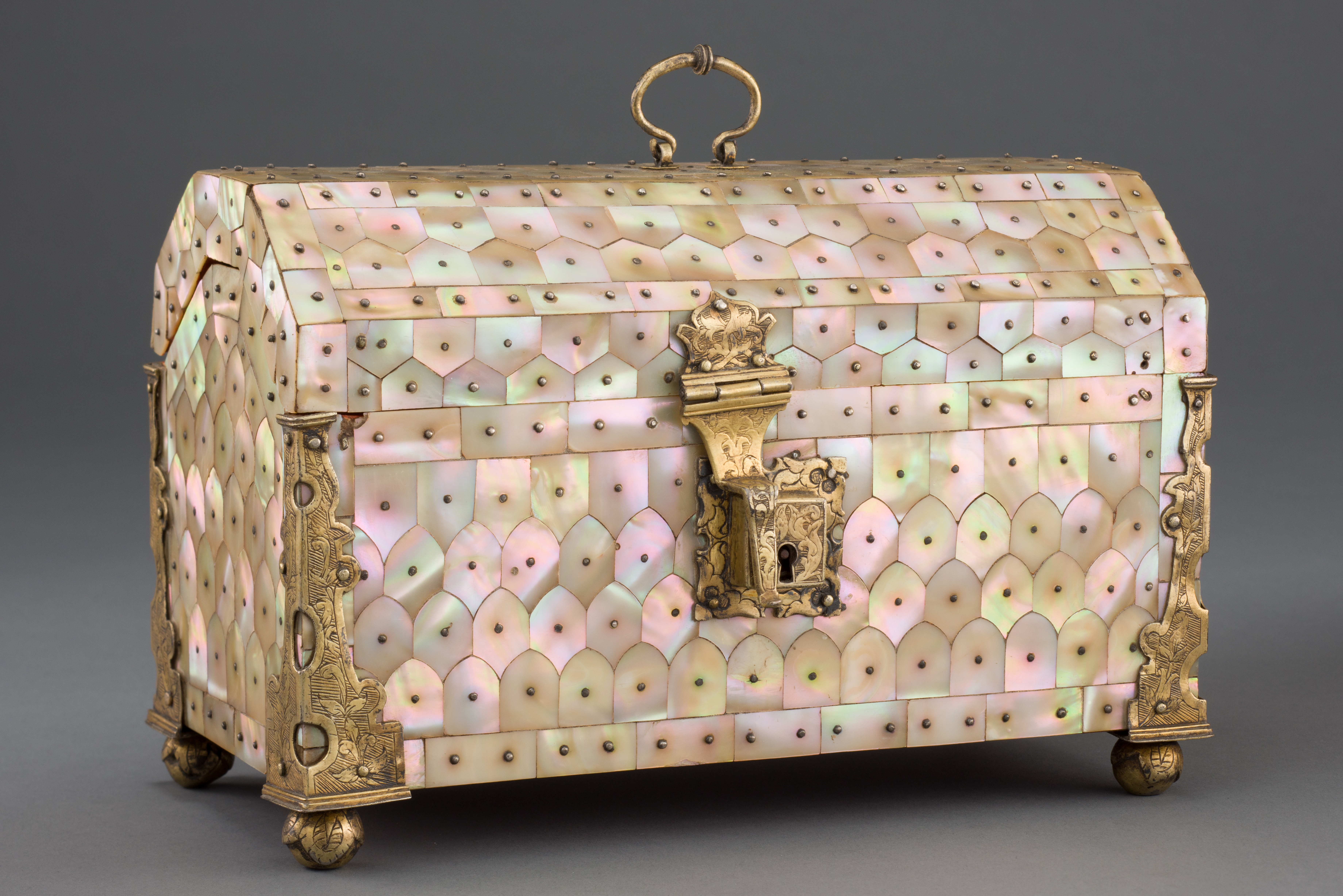 The casket is made of teak and covered with mother-of-pearl plaques held in place by small gilded silver nails. The lock is made with openwork silver, with leaves and scrolls. The central plaque is embellished with engravings and niello, of rich floral motifs. One of the most attractive aspects of this piece is the magnificent quality of the mother-of-pearl plaques which have a natural pinkish-blue hue. The finely engraved gilded silver appliqués on the sides are later added and exhibits strong European influences. This casket may have been made to store valuables such as jewellery but were sometimes also used as reliquaries for religious items. 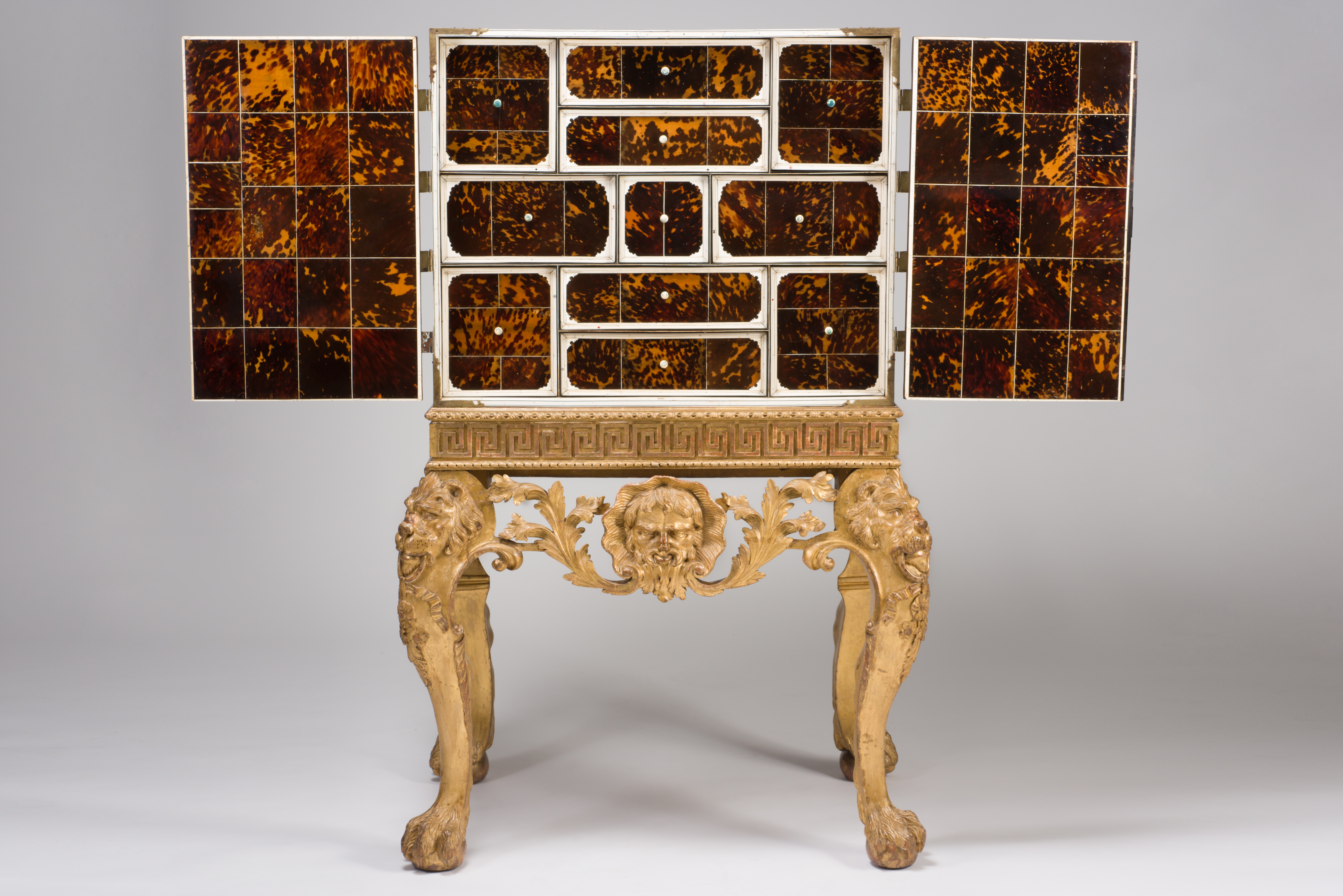 This cabinet is veneered with polished tortoiseshell panels backed with gold leaf, which gives the material extra luminosity. The carved and gilded stand was made specifically to support this extraordinary cabinet. 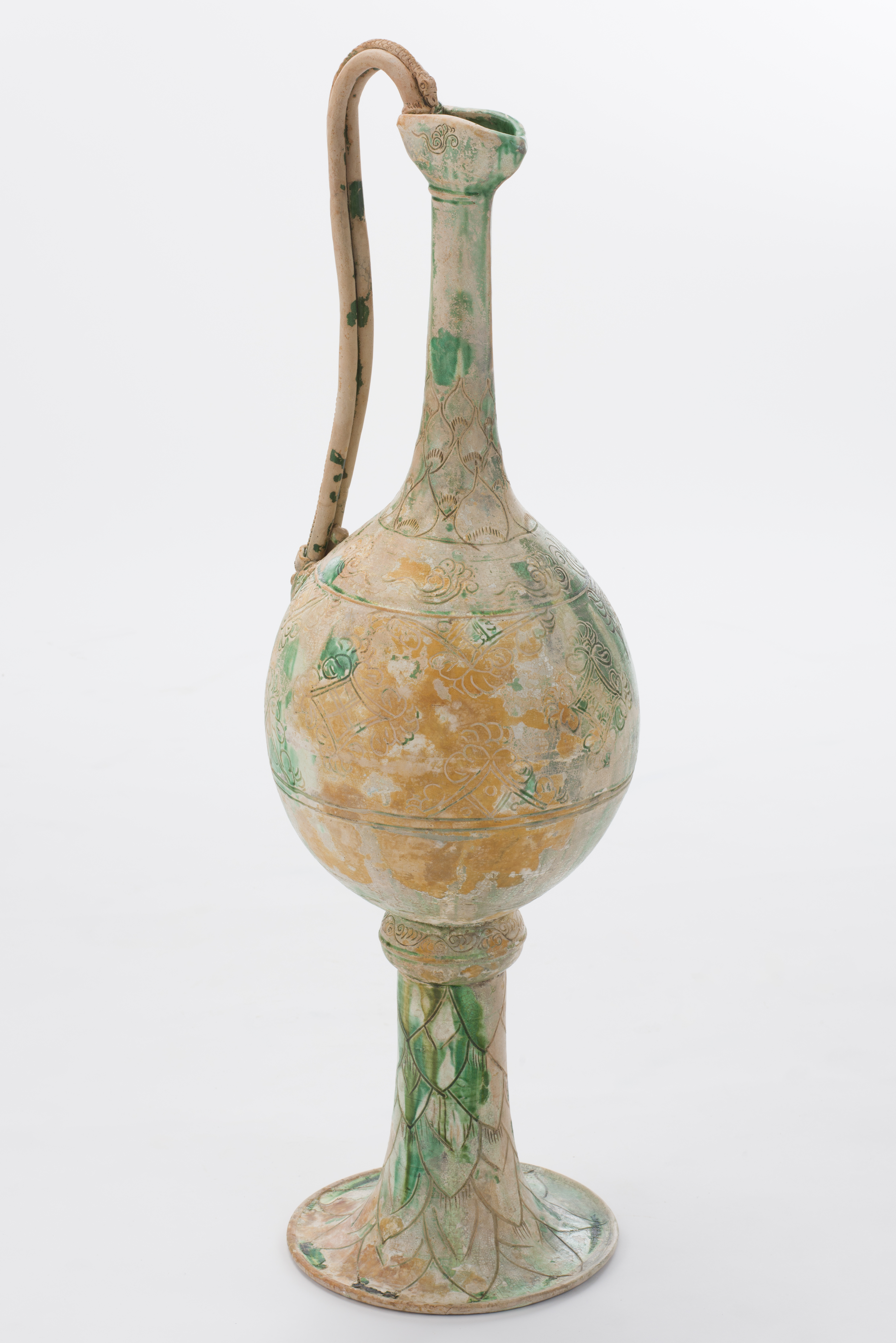 This tall ewer is the most spectacular of the ceramics found on the Tang Shipwreck. Its shape and details, such as the strap across the base of the handle, are modelled on metalwork. The body is decorated with lozenge patterns and leafy fronds, an Abbasid design seen on other objects in the wreck. This is a clue that much of the cargo was destined for the Persian Gulf. 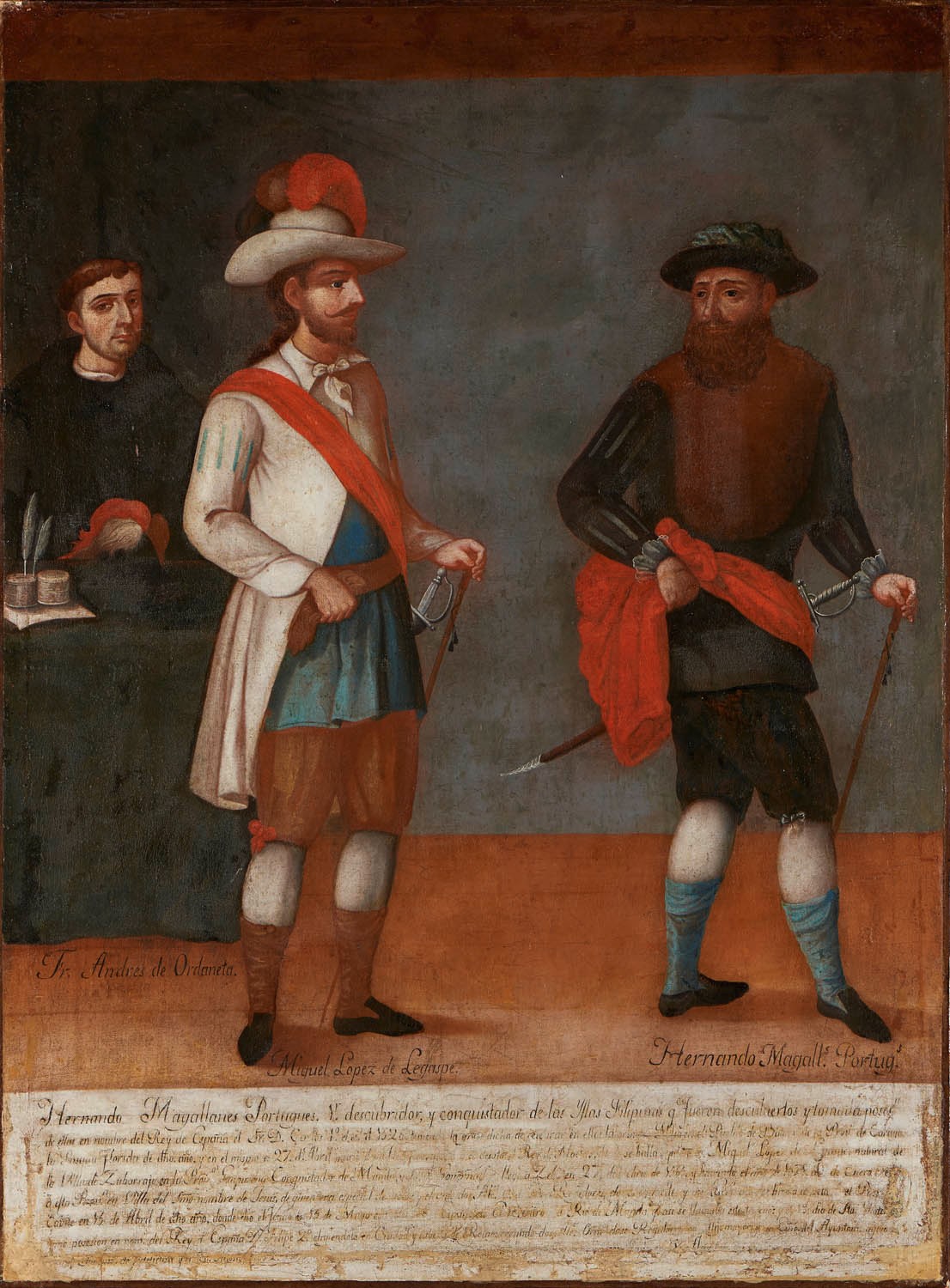 The Foundation of the Spanish Colony in the Philippines
Artist unknown Philippines, Manila or Spain, late 17th or early 18th Century
Oil on canvas, 80 x 55cm
The three men in this painting were crucial to the establishment of the Spanish colony in the Philippines, and the Manila Galleon trade. From left, they are Friar Andrés de Urdaneta (1498–1568), Miguel López de Legazpi (1502–1572), and Ferdinand Magellan (1480–1521). Magellan was a Portuguese-born explorer best known for captaining on behalf of the Spanish Crown the first fleet of ships that circumnavigated the world. Lopez de Legazpi and Urdaneta formed the first European settlement in the Philippines on Cebu in 1565. Friar Urdaneta’s documentation of his voyage was the basis for the Manila-Acapulco Galleon trade route. Spanish ships sailed this route across the Pacific for around 250 years, carrying luxury goods that created riches for Spain.