Japan is one of the major countries in the eastern terminus of the historical Silk Roads that is well-known throughout the ages for its traditions, wealth and stunning art while it was far from the foreign visitors’ access.

However, goods and travelers from the Silk Roads certainly made their way there and Buddhism was perhaps one of the most influential imports brought to Japan along these old trade routes. For instance, the city of Nara, the ancient capital of Japan that is considered as a significant center of Japanese culture, is abundant in Shinto shrines and Buddhist temples. Many valuable pieces from the Silk Roads period are housed in Nara's Shosoin Treasure Repository of the Emperor.

With all these Silk Roads connections, it is appropriate that Nara contains all the country's primary Silk Road sites and has also been the home of the acclaimed Research Centre for Silk Road Studies. 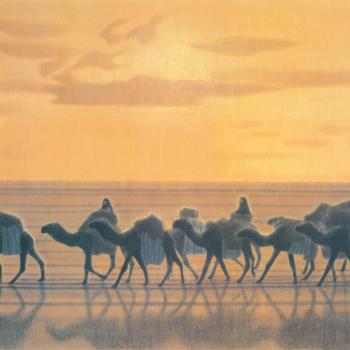 Poster, 'The Silk Roads' (illustrated by the painter Ikuo Hirayama)